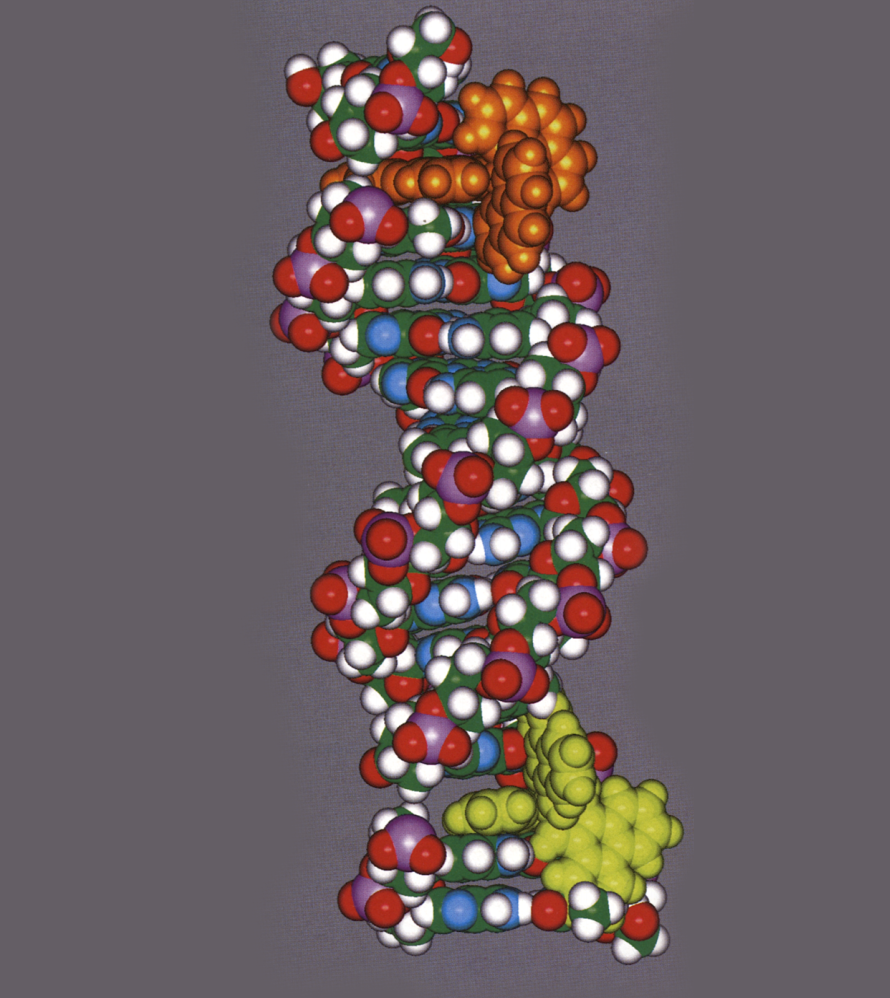 DNA-based electron transfer reactions are seen in processes such as biosynthesis and radiation damage/repair, but are poorly understood. What kinds of experiments might tell us how far and how fast electrons can travel in DNA? What does modern theory predict?

Electron transfer reactions involving DNA are clearly important in nucleic acid biosynthesis, regulation, damage, and repair. Studies of electron transfer between species bound covalently and noncovalently to DNA have given provocative results, and are at a similar stage to that reached several years ago by the protein electron transfer community [l-3]. Electron transfer has been shown to proceed over large distances (-15 to 40 A) in DNA (see Figs 1,2), but no systematic distance dependence studies of the reaction rates have yet been forthcoming [4-111. If these reactions proceed by the conventional bridge-mediated electron-tunneling mechanism familiar in proteins, in which the uncertainty principle allows leakage of the electron from donor to acceptor guided by the intervening medium, the rate of electron transfer would be expected to drop exponentially with distance, and the drop-off factor is expected to be substantial [l&13].

We describe the theoretical basis for the exceptionally large molecular first hyperpolarizabilities inherent to (5,15-diethynylporphinato)metal-bridged donorâˆ’acceptor (Dâˆ’A) molecules. Î² values relevant for hyper-Rayleigh experiments are calculated at 1.064 and 0.830 Î¼m for a complex with such a structure, [5-((4â€˜-(dimethylamino)phenyl)ethynyl)-15-((4â€˜â€˜-nitrophenyl)ethynyl)-10,20-diphenylporphinato]zinc(II), and are 472 Ã— 10-30 and 8152 Ã— 10-30 cm5/esu, respectively. The values are 1 order of magnitude larger than that calculated for any other porphyrin bridged donorâˆ’acceptor chromophore studied to date. The considerably enhanced hyperpolarizability arises from the significant excited-state electronic asymmetry manifest in such structures (derived from the strong bridge-mediated Dâˆ’A coupling enabled by the largely porphyrin-based excited state) and the large bridge-centered oscillator strength in this new class of Dâˆ’bridgeâˆ’A molecules. Our analysis of NLO properties (based upon INDO/SCI calculations within the sum over states formalism) shows a sensitivity to the degree of cumulenic character in the ground state. Calculations on structurally related multiporphyrin systems suggest candidate chromophores with further enhanced optical nonlinearities.

view more
DNA Is Not a Molecular Wire:â€‰ Protein-like Electron-Transfer Predicted for an Extended Ï€-Electron System

The earliest studies of electron-transfer proteins1 raised the question of whether or not Ï€-electron residues might facilitate electron transport.2 Three recent long-range electron-transfer experiments utilizing DNA bridges revisit this provocative, yet unresolved, question.3,4,5 The distance dependence of electron transfer in DNA is not a matter of purely academic concern; it controls the mechanism of DNA damage and repair in cells and is being exploited in new molecular probes of DNA sequence. We present a theoretical analysis based upon very large scale self-consistent-field quantum calculation of all valence electrons (as many as âˆ¼3300) in these three systems. This computation is the first performed on such large macromolecules and also the first to extract long-range electronic interactions at this level of theory. DNA electron transfer is found to be mediated by through-space interactions between the Ï€-electron-containing base pairs, but the magnitude of the coupling facilitated by this channel drops rapidly with distance, as a consequence of the âˆ¼3.4 Ã… noncovalent gap between base pairs. These predictions are in agreement with most of the experimental data. The rapid decay of electron-transfer rates with distance computed here suggests that biologically controlled DNA electron-transfer events, of importance in DNA repair,6 must function over relatively short range. Moreover, the predicted distance dependence of electron transfer in DNA is strikingly close to that found in proteins.